After rising three weeks in a row including by 15,000 the week prior, mortgages in coronavirus-related forbearance dropped by 92,000, according to Black Knight.

That net decrease resulted from 146,000 removals and 54,000 entering forbearance. Nearly 2.74 million borrowers sat in active plans as of Jan. 5. The forborne mortgages represent 5.2% of all active home loans, with a combined unpaid principal balance of $547 billion, down from 5.3% and $568 billion a week ago. 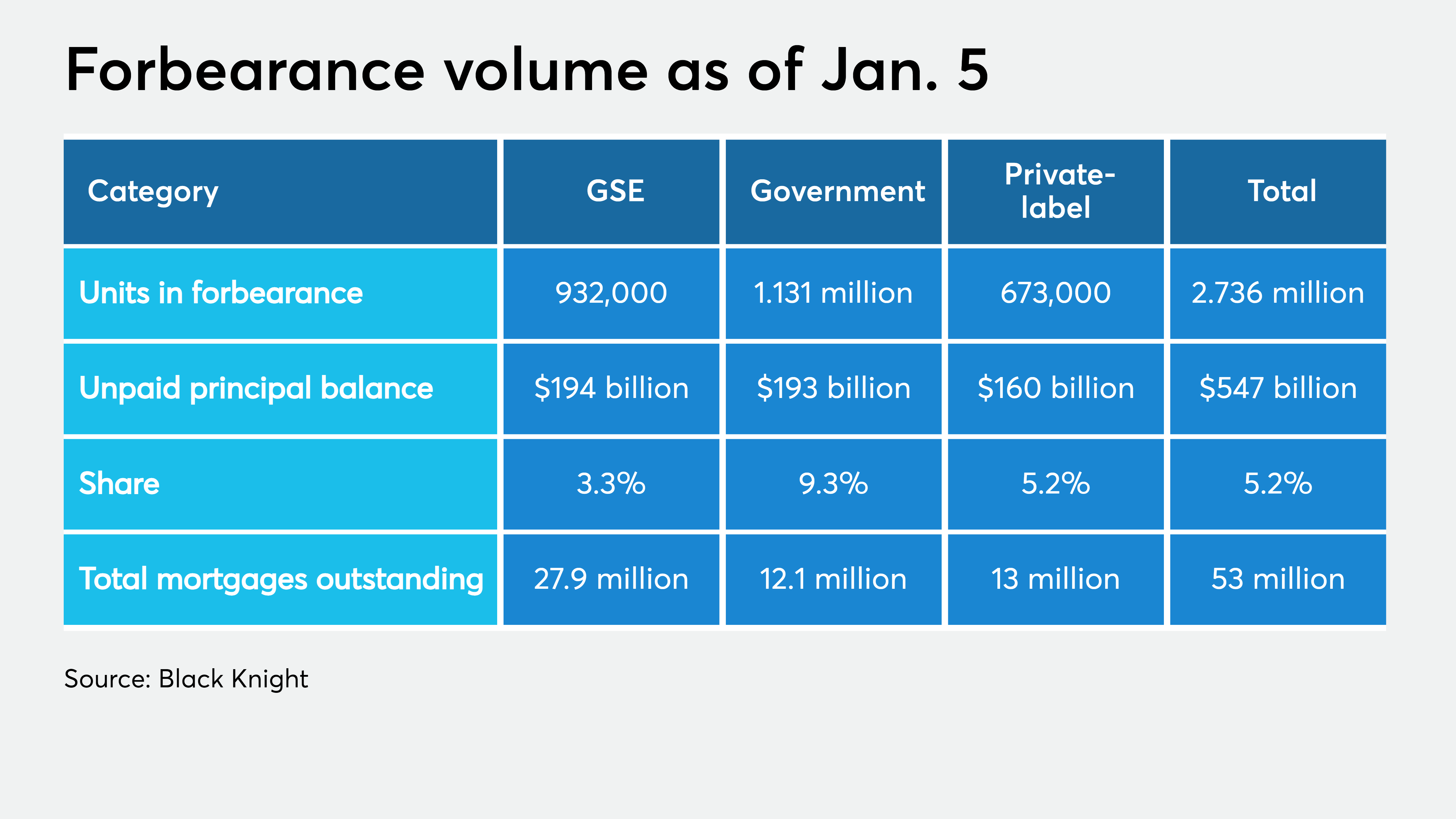 Forbearance activity declined for each loan type week-over-week. Fannie Mae and Freddie Mac mortgages fell by 32,000 to a total of 932,000. Government-backed dropped by 33,000, bringing its total to 1.131 million. Portfolio and private-label securitized loans — which aren’t covered by CARES Act protections — decreased by 27,000 to a total of 673,000 in plans.

While this marks a major reversal from recent trends and the largest weekly fall off since early November, the start of each month typically shows this kind of improvement. Comparatively, the 3% decrease in forbearance plans from the first week of January sits below the drops of 18% in October and 9% in July.

“The declining rate of improvement implies that those who were able to absorb the shock of the pandemic and get back on their feet, may have already done so,” Andy Walden, Black Knight economist and director of market research, said in a statement to NMN. “The rising share of extensions vs. removals suggests that those who remain in forbearance are in need of help and may require the full 12 months allotted to them under current pandemic-related assistance. It also increases the number of homeowners who will remain in plans when the first wave of 12-month cutoffs come up at the end of March, setting up a larger unknown for how that will impact both the mortgage and housing markets.”

Past-due borrowers will likely need further government intervention when the CARES Act expires, as will servicers in order to avoid a tidal wave of foreclosure.

<p>You may have heard thereâs a ânew mortgage fee.â And you might have been told to hurry up and refinance ...

10-Year Mortgages vs. the 30-Year Fixed: Which Is Better?

<p>Itâs time for another mortgage match-up folks. Today, weâll look at 10-year mortgages versus the 30-year fixed mortgage to see ...

<p>Thanks to another year of stellar home price appreciation, the 2021 conforming loan limit will increase to $548,250, per the ...